Like a single strand of wafting smoke, Niia’s debut album “I” is entrancing in its sparse, elegantly gliding beauty. Her follow-up to 2014’s Generation Blue EP and first release on Atlantic Records takes that release’s lush, bassy sound and pares it back to reveal smooth, fully realized songwriting and timeless aesthetics. It’s a slow-burning, intimate document that tips its hand towards genres as disparate as the glory days of trip-hop, mid-tempo disco, and misty jazz while retaining an impressively unified mood evoking modern noir.

With its interlocking guitar parts, gorgeous instrumentation, and Niia’s gliding vocals, “Body” provided a taste of what was to come with I, which expands on that sound while bringing in a variety of other influences. You can hear the spacious and cool-handed trip-hop of Massive Attack and Zero 7 on the cascading “Last Night in Los Feliz,” and “Hurt You First” ripples with lush production touches that sound like a love letter to the girl-group R&B of the late 1990s. Then there’s “California,” which evokes the quiet-storm R&B perfected by Sade while drawing from the dusky vocal jazz that’s been so formative in Niia’s artistic growth.

Lyrically, I explore the seductive fruit that new love brings, along with the anxieties and complications that result in giving yourself over to another. “I usually hide behind the lyrics,” Niia admits regarding I’s personal bent, which took shape during a songwriting process that transpired over the last year and a half. “I was surprised how transparent I got while writing these songs.”

Along for that journey is Grammy-nominated producer Robin Hannibal, who’s lent his considerable talents to artists as varied as Kendrick Lamar, Chairlift, and Cee Lo Green—not to mention his work as part of the moody, gorgeous R&B act Rhye. Hannibal and Niia linked up five years ago, and they quickly became kindred spirits when it came to their artistic aims. “I love Robin’s production because it has a timeless quality but still feels fresh,” Niia says. “I want to flex my voice and be the star of the song, so it was really fun to challenge Robin and myself to make that work.” The result is a warm, engaging document that tugs at the strings of Niia’s previous work to reveal greater sonic depths, made more apparent by the impeccable arrangements working in perfect congress with her impossibly flexible vocals.

A confluence of the contemporary and current carries a strong presence on I highlight “Sideline,” a dark, seductive slice of orchestral pop that recalls the intimate singer-songwriter stylings of Carole King and Tidal-era Fiona Apple—all while addressing concerns as of-our-moment as questioning the contents of a loved one’s background on their cell phone. “It’s about the idea of being a girl and dealing with what it’s like to be in a relationship now,” Niia says. “It plays into my insecurities of being in a relationship that I care about. How do you get through all the shit?”

For anyone looking to find an answer to that question (or a soundtrack for their own ups and downs in the world of love), “I” is sure to score lonely nights and newly hopeful mornings alike. It’s a confident, bold album that nonetheless retains an enigmatic quality—a collection of dreamlike sounds that serves as a perfect entry into this new chapter of Niia’s career.

SF. What 3 records you would take with you on a deserted island?

SF. HAHAHAHA that is amazing and now look where you are! Favorite story.

SF. If you could share a joint with anyone who would it be and what’s playing in the background?  Set the scene.

N. I would want to share a joint with the grandfather I never met on my mothers’ side.  He came over from Italy when he was in his 20s. We’d be sitting on the porch waiting for dinner to be ready. You’d only smell red sauce and weed. There would be opera playing of course. My mom is named after a Rossini opera.

SF. What was the moment you realized who/what inspired you initial desire to become a musician? N.  My whole family is musical so I’m just one of many musicians. I realized I enjoyed learning about music more than any other subject so I’d skip class to go play the piano. My mom always encouraged me to be the best musician I can be vs striving for fame. It just came natural and I thought it was crazy I could do what I love For my work!

SF.Whats A piece of advice you have never forgotten?

N.   There’s always more you can learn as a musician

N. Saying no is sometimes more important than saying yes.

N.  To perform a James Bond theme at the Oscars and sing on the bachelor.  Ha.

SF.  Ok, you keep making it difficult for us not to fall in love with you. What was the first time you remember smoking marijuana? 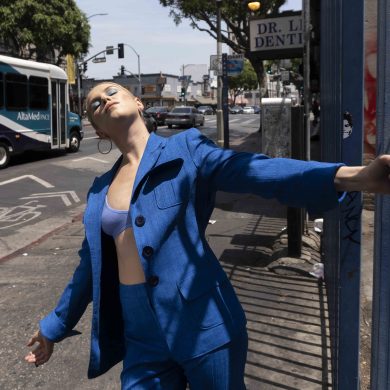 ‘A BEAUTIFUL SPACE’ WITH GRACE WEBER
ARE YOU 21
OR OVER?