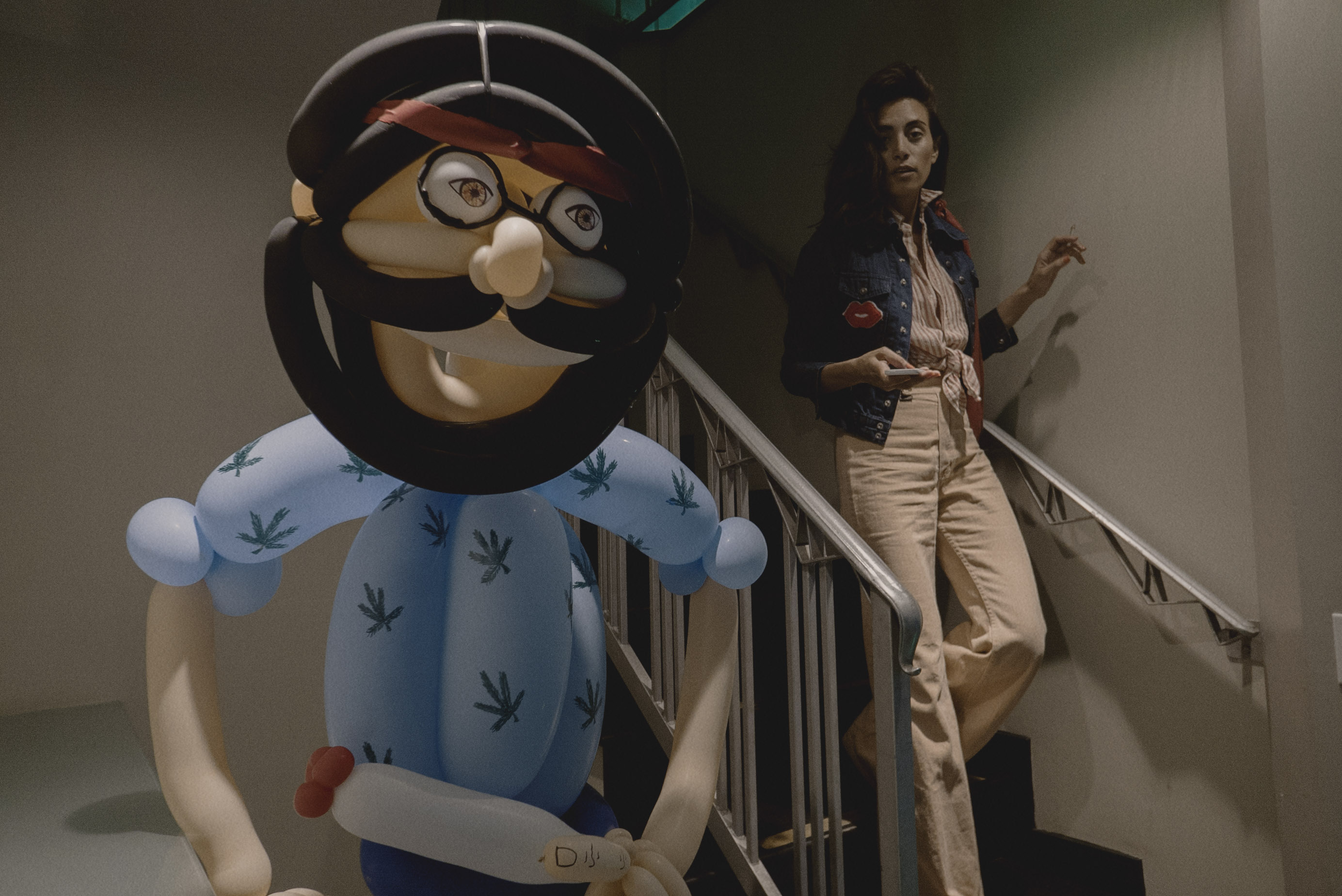 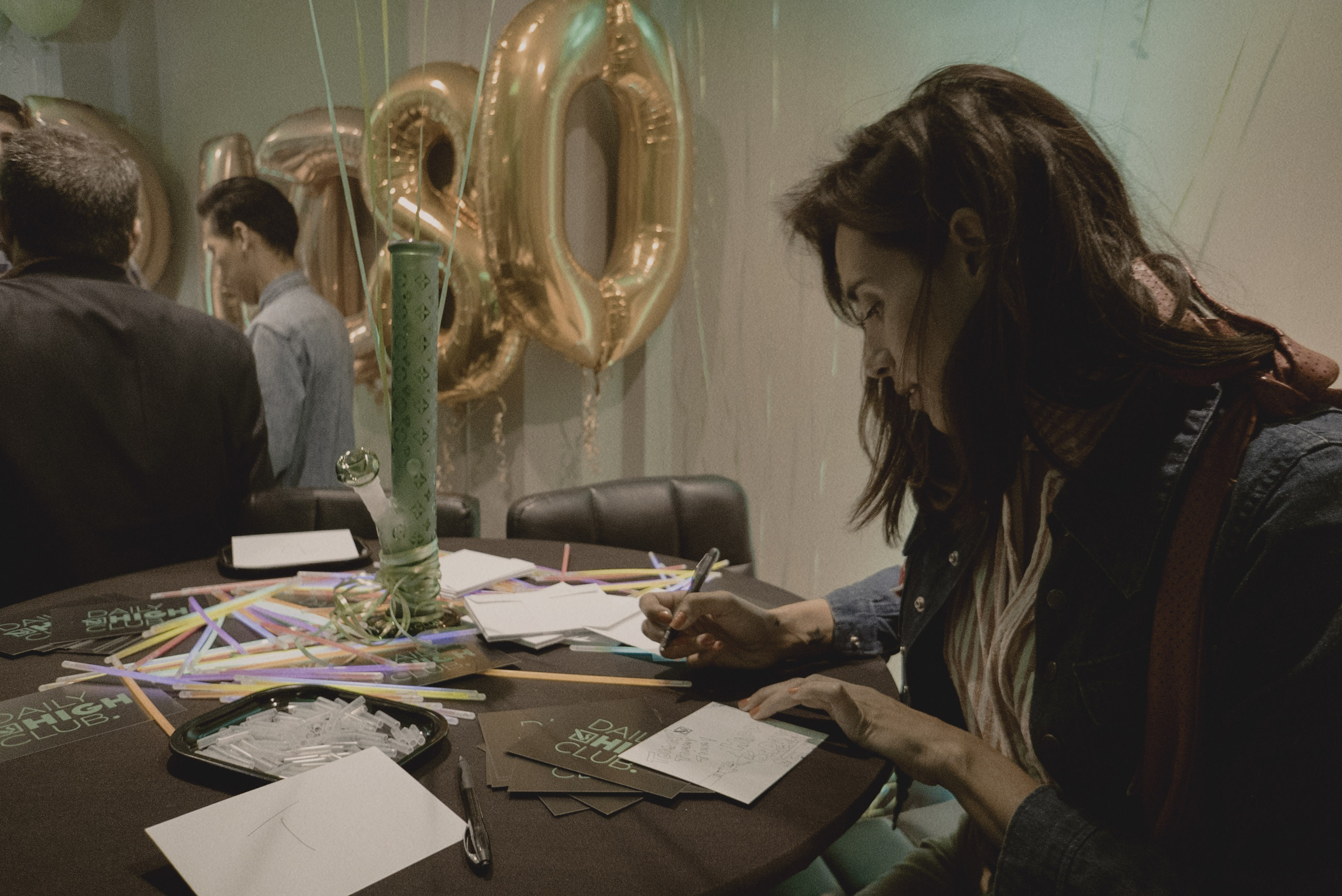 The day started out at Blackwood Coffee on Sunset, where I plot the day with a cup of joe and smoke. I became curious in the young man next to me, as he ran sides for an audition. He uses his phone in selfie-mode to watch his delivery. I try to get his attention by waving at him, but he doesn’t notice. So I give him a pat on his shoulder and he jumps like a dramatic little bitch. It was clear he doesn’t like his process interrupted. He took out his Bluetooth earbuds.

“I get it man, the hustle and grind.” I ask him, “Are you taking any classes?”

“I’m good bro, my teacher has been on seven episodes of NCIS Miami.”

I can’t help myself, “Dropping the F-bomb in West Hollywood? Good luck buddy.”

Back at the office, Ace and I smoke a strain labeled 9% CBD and 7% THC, so there is either an 85% X-factor or I’m a fucking idiot. Being a lightweight, I’m trying to find a CBD heavy blend to help me quit cigarettes – this one isn’t it. My thoughts become fragmented and skip around like a scratched up dusty vinyl record as we plug away behind our devices reaching out to cannabis brands. We hear an alarm sound just outside our door. We both froze frame in wide-eyed paranoia. The door slams open. It’s our founder Lola Langusta dancing in excitement and gyrating her feet up-and-down so fast that one of the last pedals of my favorite orchid falls off. This better be important.

She doesn’t even wait for me to answer.

“I waited outside for twenty minutes for the most appropriate time to share the news.”

I try to respond and she cuts in, “We are going to Tommy Chong’s birthday party!” she beams.

“Yes, and we should write an article about it!” She insists, as she lights her ceremonial joint.

Spending time on any article is a complete waste of energy unless you distill it down to 140 characters including your #hashtags. The art of telling a female what to do is a delicate business. You have to get creative. I’ve tried the approach of asking if I can make a suggestion. But that only worked a couple times and now anytime I use it she knows exactly where I’m headed.

I tried fluffing her up for a suggestion by asking a couple trivial questions. I must have teleported the direction I was headed with my tone or body language because she sniffed me out from a mile away.

Lola isn’t sure about the dress code so deciding what to wear to a star-studded Tommy Chong birthday party takes longer than expected. Do you do classy or keep it simple and down to earth? She spends about thirty minutes trying on different outfits while I look up where it’s taking place: the Deco Building at 5209 Wilshire, an architectural feat in itself. I go for the suit. As I wrap a tie around my neck, a scene from Cheech and Chong’s Up In Smoke hit me. It’s the one where Chong addresses the silly band suits that the manager tried to get them to wear and Tommy responds, “If we’re going to wear uniforms man, let’s everybody wear something different.” I rip off the tie and pull out the 60’s French workers jacket.

Finding parking for the event takes thirty painful minutes and I’d like to take the time to make a public service announcement to all the Uber and Lift drivers. YOU DON’T OWN THE FUCKING ROAD. I’m talking directly to the bastards that park in the middle of the road with your hazards and expect people to wait. As the line to get around you grows, so does our patience, not to mention the safety of your riders, who could get hit by an enraged driver trying to get around your dumb ass.

As we walk towards the Deco Building, we spot a step-and-repeat with photographers and sycophants. It looks like a suit and tie affair and my anxiety begins to grow about the threads. The worst part is I’m wearing a hat and if asked to take it off I have irreconcilable hat hair underneath.  As we got closer, we spot a couple flannels.

We reach the two men at the door and our names end up not being on the list. It quickly becomes a bit of an episode with the token muscle. There isn’t anybody behind us so I’m not sure why he is in a hurry. These guys are always so quick to flex their authority and could all take a chill pill or even better take a _______. An older gentleman with a clipboard steps up. Lola tells him about Stoned Fox and, after realizing we are media, let’s us right in.

Upon entering we’re greeted by a massive stage with projected titles behind it that read Slightly Stoopid, a band who describes their music as “a fusion of folk, rock, reggae, and blues with hip-hop, funk, metal and punk.” The room is dark with an ambient emerald green lighting filled with a smokey haze throughout the venue. I never could find the smoke machine.

Surprisingly, the DJ plays only hip-hop. I thought to myself, “Tommy must be a cool cat for being into this stuff at his age.” I do a little Google search on my phone and find a tweet from Tommy saying ”I want to be on some rap songs. I’ve done more for the game than a lot of the OG’s.” I also find an interview with Merry Jane where he said “I’ve been talking to the rapper A$AP. I was supposed to meet with him but he never showed…typical rapper.” As Lola dances along she tells me, “Loosen up man.” I smile and start the subtle head bop to the beat routine but I can’t kid myself.

We head over to a sponsor booth where the Daily High Club have empty birthday cards laid across the table for guests to write their notes to Tommy. They gift us a steamroller pipe, modeled after a joint the size of the ones they smoked in the Cheech and Chong movies, with a Tommy Chong illustration labeled “Tommy’s 80th.” If you’re interested in snagging one, head on over to The Daily High Club. I thought about how genius the gift was considering the vacation time Chong spent in 2003. It’s great to see the social progress that has been made since then, but we still have a long way to go. Tommy’s wife, Shelby Chong, a stand-up comedian/part-time clothing designer, approaches the booth where video cameras and light setups quickly swarm around her, as she begins a broadcast to the world. Suddenly another Up In Smoke scene hits me. The part where the cops spied on the so-called “criminals” through the peep-hole zipper.

Across the room, we find a company called Hyer who make dab rig vaporizers. They are elevating the dab market by eliminating the need for a torch. It’s all electronic and can be charged with any USB port. They just won 1st place in the High Times Cannabis Cup for best product 2018. They ask if we want to give it a try and before they could finish their sentence Lola engulfs my face with a cloud of smoke.

We make our way upstairs and join a crowd circled around Tommy’s cake in admiration – a real piece of art. I spot Tommy making his rounds across the room near a table featuring Chong’s Choice goods. We politely push through the crowd but like a puff of smoke, Tommy had disappeared by the time we arrive. The Chongs Choice flower was showcased in containers that look like they came off the set of Kubrick’s 2001: A Space Odyssey. Lola scores a pre-roll but the woman is unsure of the strain. The word on the street is, that Chong is the authority connoisseur for sourcing the strongest stuff, so I “suggest” to Lola that she proceed with caution.

We sit at a table that overlooks the dance floor and take in the various characters of the night. A hipster with a man bun doing a light-saber routine in front of the stage reminiscent of the infamous Star Wars kid Youtube video. Lola shoots some video of it in portrait mode, which drives me insane. Thank you social media. As the overwhelming desire to leave starts to creep in, I begin feeling guilty for even considering it.

Lola must have read my mind, “I’m ready to go if you are?” She says.

“Maybe we just go outside and get some fresh air,” I propose.

We spot Tommy on the dance floor surrounded by people taking turns giving him adulation. As we head to his way, I begin cooking up a clever introduction but nothing comes to mind.

I didn’t want her to know I was in little bitch mode, “I feel like an idiot. We didn’t bring him a birthday present.”

I turn back towards Tommy but he’s disappeared again. We decide to take a photo next to the huge Tommy Chong balloon and head outside, and that was the closest we got to the legendary icon.

While leaving, we decide to take some shots of Lola in front of the step-and-repeat. I give Lola direction to walk towards me but she trips on the red carpet stanchion and almost takes down the entire lighting setup – typical Lola. She just giggles and smiles at the crowd as we eagerly shuffle away.

We both compensate our shame by reaffirming our decision to leave. If I could do anything different it would have been to take an Uber so I could have indulged. As we talk about potential places for dinner, I follow her a block in the wrong direction.

“Where are you headed?” I ask. 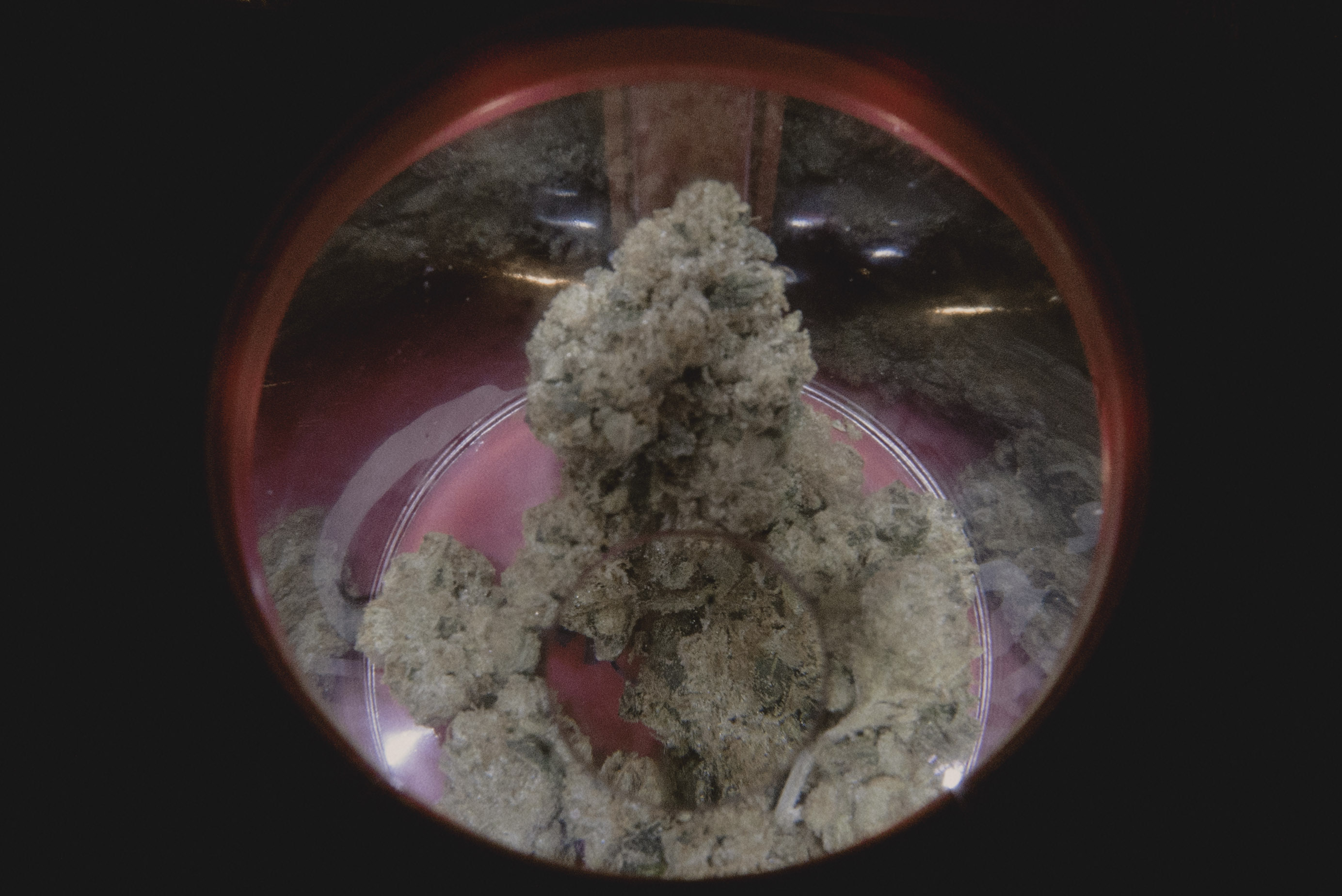 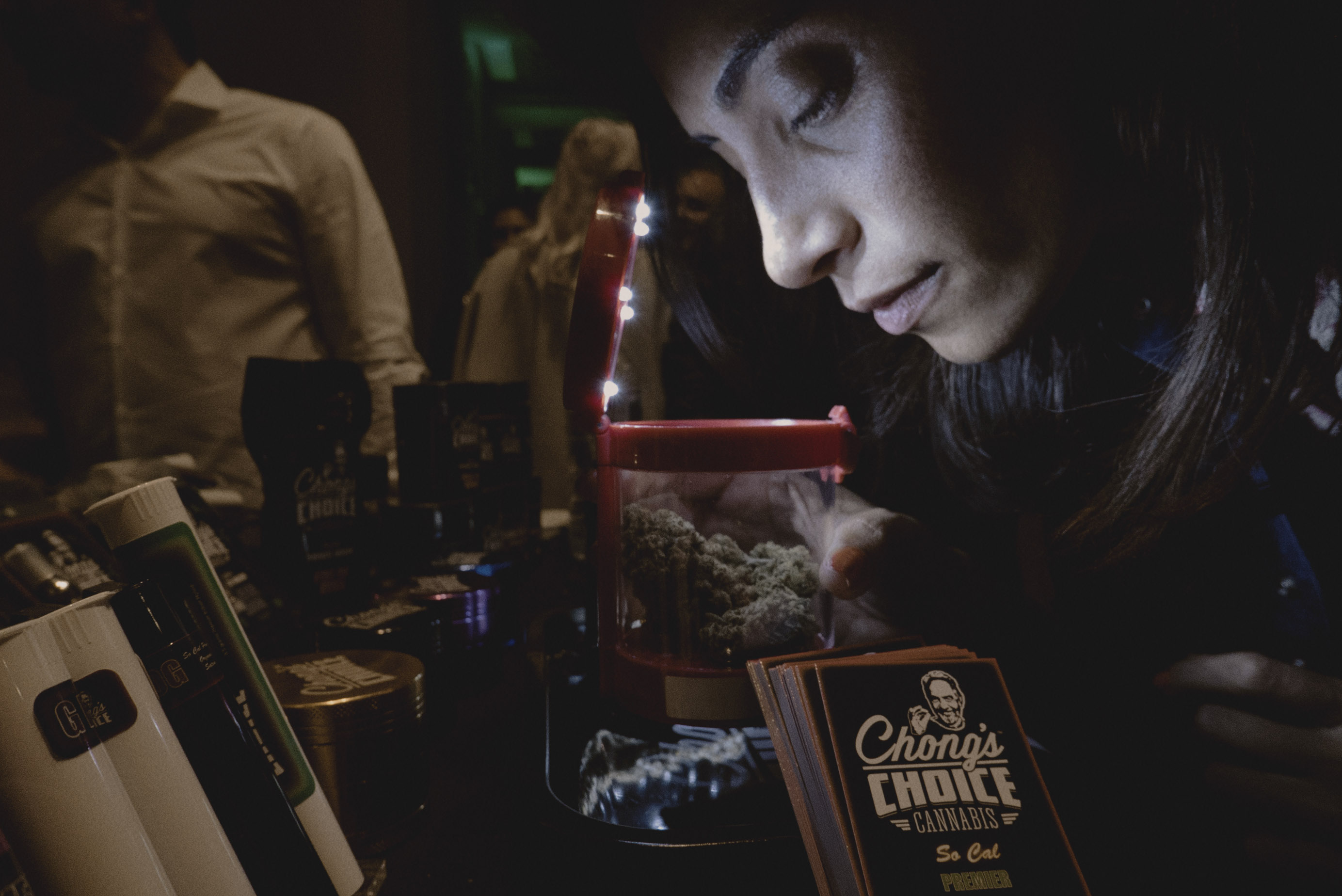 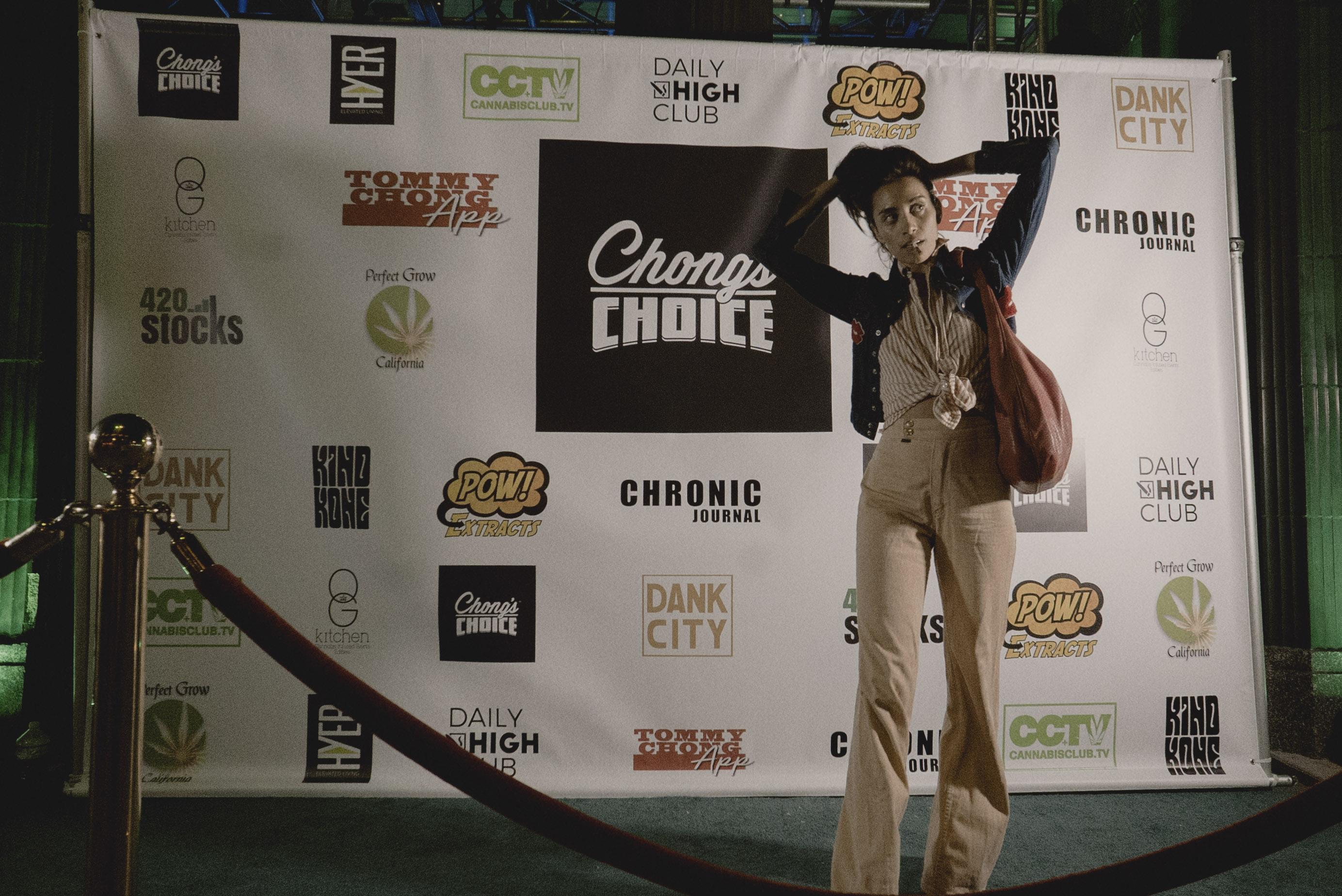